I’m a PhD student at the University of Sydney, where I’m studying human-wildlife conflict and the human aspects of wildlife management. From elephants trampling crops to wolves eating cattle, wildlife can be detrimental to human livelihoods, and this often results in lethal control of wildlife species, whether legal or not. Such control has led to declines in many species globally, which can have important consequences for biodiversity more broadly.

While my background is in ecology, my PhD research is interdisciplinary, seeking to improve management of conflict by gaining an understanding of how stakeholders form opinions on wildlife and what influences their behaviour in managing these species.

Prior to commencing my PhD, I’ve worked in environmental research and consulting in Australia, the United States, United Kingdom, and China. You can find more information about my professional experience here.

My PhD: Learning to Live with the Dingo 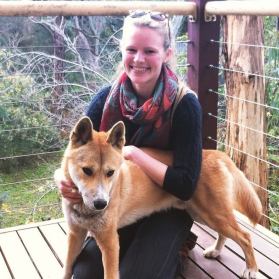 For my PhD research, I focus on the Australian dingo. The dingo provides an interesting case study in human-wildlife conflict, as its position in Australian society is not well known. Having arrived in Australia relatively recently (3000-5000 years ago), its status as a native species is sometimes ambiguous, which is further complicated by its ability to interbreed with domestic dogs. Public perceptions of the dingo may be influenced by previous attacks on humans (e.g. the Chamberlain case and on Fraser Island). The major factor contributing to dingo management, however, is their interaction with livestock.

Livestock producers across Australia are at war with the dingo, who poses a threat to their stock and, consequently, their livelihoods. However, governments pour never-ending resources into managing dingoes with little knowledge about whether their approaches are effective.

This system isn’t working. Today, scientists globally are acknowledging the important role that predators play in regulating ecosystems and their potential in changing how we manage wildlife. In Australia, not only can dingoes play a role in suppressing introduced pests (e.g. cats and foxes, who contribute to Australia having the highest mammal extinction rate in the world) and the growing kangaroo populations which compete with livestock for food, but scientists are finding that lethal management of dingoes can be counter-productive to reducing livestock losses. Changing this system is difficult, so alongside ecological and agricultural research, investigation into the social and political contexts preventing progress is essential.

Australia is lagging behind other countries in human-carnivore conflict resolution, so I draw dingo management into an international context for comparison, while identifying public and producer perspectives on dingoes and their management through social surveys. My research seeks to understand how coexistence can be possible, changing the way we conduct wildlife management to the benefit of biodiversity and rural communities.